CSX Corporation (CSX) is a major operator in the Eastern US. CSX, along with Norfolk Southern (NSC), holds a virtual duopoly in that region. In the week ended April 9, 2016, CSX’s railcars, excluding coal and coke, declined by ~5%. 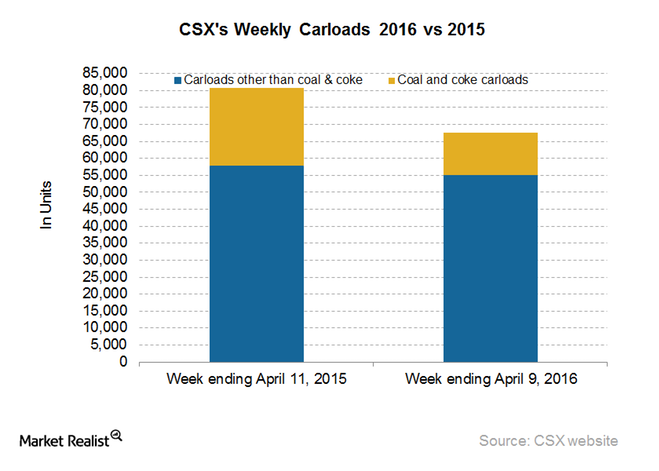 CSX’s coal plus coke railcar count fell by 45% to ~13,000 units in the week ended April 9, 2016. It reached nearly 23,000 railcars in the corresponding period in 2015. This fall was higher compared with its main competitor Norfolk Southern’s fall in coal and coke railcars for the reported week. Coal accounted for 16% of CSX’s total volumes and 19% of its total revenues in 2015.

According to the March 2016 press release by the US Energy Information Administration (or EIA), the Appalachian region’s coal output is expected to fall by 9% in 2016. However, the EIA expects total coal production to increase by 2% and to stabilize in 2017. CSX mainly connects coal mining operations in the Appalachian mountain region. This should impact CSX’s coal transportation in 2016.

The eastern railroads have cited the shift from coal to natural gas (UNG) of electricity generation plants as one of the reasons for the fall in utility coal transportation. The coal tsunami has affected major coal producers in the US like Alliance Resource Partners (ARLP), CONSOL Energy (CNX), and Peabody Energy (BTU).

The bull and bear commodity groups

Commodities that posted major gains for CSX in the week ended April 9, 2016, were:
lumber and wood products
food products
waste and non-ferrous scrap 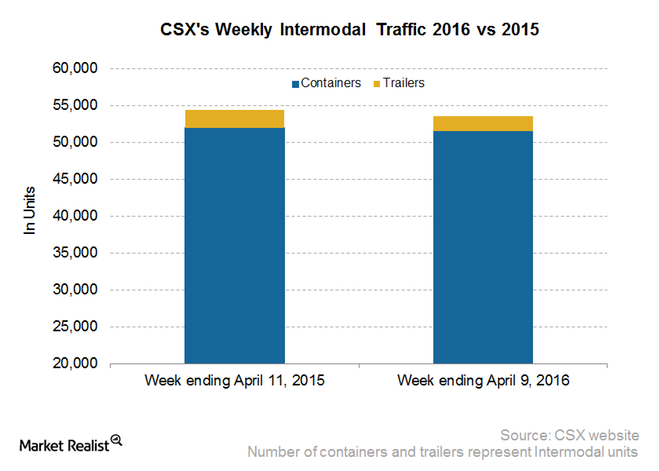 Why does intermodal matter for CSX?

Railroads are four times more fuel-efficient than trucks, and the driver shortage in trucking is fueling intermodal growth. While about half of US’s rail intermodal volume consists of imports and exports, railroads are more environmentally desirable than the heavy reliance on highways for freight transport. In 2015, intermodal accounted for ~20% of revenue for the major US railroads.

Why does this matter? Intermodal is viewed as a solution to subsidize the shrinking coal business by all the Class I railroads. Intermodal volumes were roughly 42% of CSX’s total volumes in 2015, and its share of the company’s 2015 revenue was ~15%.

Intermodal traffic is largely dependent on factors such as access to major seaports, highway-to-rail conversions, exclusivity to certain ports, and retail sales. The Association of American Railroads (or AAR) has observed a strong positive correlation between retail sales and rail intermodal in recent years. The AAR noted that the intermodal growth came through highway conversions rather than consumption. However, according to the AAR, the rise in intermodal doesn’t necessarily translate into growth in retail sales.

Investors who would like exposure to the transportation space can invest in the Morningstar Wide Moat ETF (MOAT). All major US railroads make up 10.8% of the portfolio holdings of MOAT.