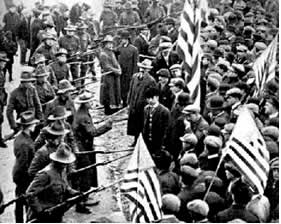 Union members need to realize across ALL crafts, that “We are the Union” and not our leaders. Those men and women were elected to represent our best interest. When the membership feels that the leadership has failed, then by all means, we must take action. Appalachian Union members are taking action on their own. The strike is not lawful, On Feb. 21, Morrisey tweeted, ” ‘The impending work stoppage is unlawful and should come to an end.’ — Patrick Morrisey.” However, because the membership has taken matters into its own hands, this leaves the Union free of litigation so that they can continue to negotiate. There is little doubt that a strike on the railroad would indeed be painful for the members, financially, mentally and physically.

Also, our situation would be different since there’s no doubt that Men with guns will try to force us back to work on an illegal strike. “It is better to die on your feet than to live on your knees” this quote may seem a bit dramatic, but I’m tired of worrying if today is the day I don’t have a job anymore.

With “right-to-work” laws spreading across the country, and a Janus Supreme Court decision that could decimate public-sector unions on the horizon, striking teachers are offering a blueprint for how to win when the odds are stacked against labor: Strike, win and then keep striking to win more—no matter what union leaders say.

In some ways, it makes sense that Appalachian workers are showing the way forward to fight the boss in the era of Trump and Janus. West Virginia has a long history of rank and file militancy—under conditions far tougher than those facing workers today. State Senator Richard Ojeda III—a vocal supporter of the teachers’ strike now running for a House seat in West Virginia’s 3rd District, which includes the state’s southern coalfields—wrote a long thread on Twitter connecting recent events back to West Virginia’s history as a site of labor struggle. Senator Ojeda writes that the strike (known as #55strong, referring to the number of counties in the state) has become “a fight for the soul and spirit of West Virginia that started hundreds of years ago,” when “investors came to West Virginia and purchased most of the land for all but nothing.”