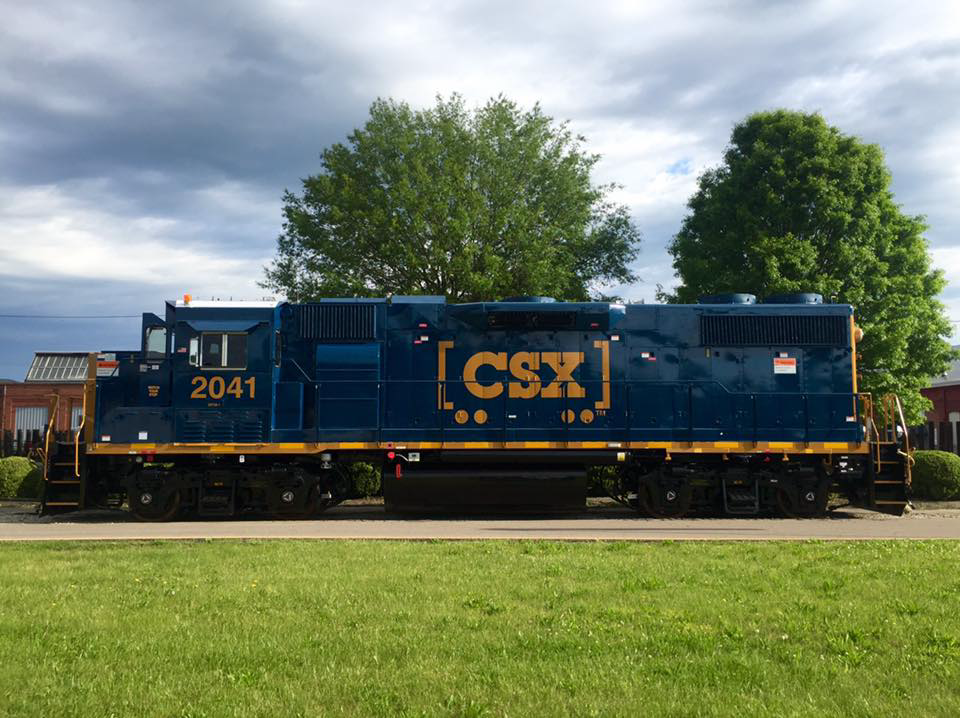 The morning of Aug. 21, a CSX train passed through Huntington eastbound and on toward Virginia. Behind the two, six-axle locomotives at the head of the train were several dozen tank cars holding hazmat placards bearing the number 1267 — petroleum crude oil.

Trains carrying crude oil have multiplied the past few years because of drilling in the Bakken Shale of North Dakota. Movements of frac sand into the Marcellus and Utica Shale regions have increased, also. All those trains have led to a shortage of locomotive power nationally despite the slowdown (or in railroad terms, headwinds) in the coal markets. That’s been good news for places that manufacture locomotives, and it’s been good news to places that rebuild old ones and otherwise would have been retired.

Huntington is one of those places.

CSX spokeswoman Kaitlyn Barrett said a rebuilt four-axle locomotive costs about one-third of what a newer six-axle unit does. And four-axle trains, which are rare to nonexistent among new models, are what the railroad needs on some of its routes, she said.

So, CSX saves millions of dollars on the new power it needs to move freight, and the 360 workers at Huntington are guaranteed jobs at least until the contact expires in 2017.

CSX’s Huntington Locomotive Shop has 11 acres under its roof and many more outside where locomotives are stored and tested. It’s not the only repair shop on the CSX system, but Plant Superintendent Charles B. Hare describes it as “the flagship repair facility of the CSX fleet.”

CSX does more at Huntington than rebuild locomotives. It also has a traction motor shop, a wheel and axle shop and a truck shop that support all the system shops across the network.

In rail terminology, a truck is the assembly at the bottom of the locomotive that supports the wheels, actions and traction motors. The diesel engine on the locomotive powers generators that drive the motors that turn the wheels.

Nevertheless, the rebuild program occupies most of the time and resources at Huntington.

With the rebuild program, CSX’s operation at Huntington can be likened to the Toyota Motor Manufacturing West Virginia engine and transmission assembly operation in Putnam County and Hino Motors’ operation in Wood County. In this case, though, workers start with something old, take it apart and reassemble it into something new. This can extend the life of an older locomotive by 25 to 30 years or more.

Every moving part of the locomotive is removed from the frame, inspected and repaired or replaced if necessary. The old cab comes off and is cut into small pieces as scrap. The 16-cylinder engine is removed and taken apart. The block and other large parts are cleaned, inspected and repaired as necessary. The same goes for the wheel and axle assemblies.

Once the frame is stripped clean of the cab, engine, generator and trucks, it too is cleaned and repaired. The steel plates that form the lower parts of the front and rear of the frame are removed and replaced with thicker steel for safety and durability.

When the frame is ready for a new cab, it receives one that was manufactured by an outside supplier in Boise, Idaho. The cabs comprise about half the total cost of the rebuild, and the Huntington shop receives two every other week. The cabs are designed for crew safety and comfort, including air conditioning. They also have the latest technology.

The Huntington Locomotive Shop began the rebuild program in 2010, when it upgraded 10 SD40-2 locomotives and designated them as SD40-3 models. Train fans can identify them because they carry identification numbers on their cabs ranging from 4000 to 4009.

By the way, SD stands for special duty. Those are six-axle locomotives. GP is short for general purpose. Those locomotives have four axles.

The West Virginia-rebuilt locomotives also can be identified by the lighted numbers at each end. Older models have black numbers on a white background. The rebuilt units have white numbers on a black background.

One thing that kept the rebuild program going in Huntington was a new labor contract signed Oct. 23, 2013.

“We signed an agreement (with our local craftsmen) at the end of 2013 to build 121 four-axles over a four-year period,” Hare said. “This October, we will be two years into that contract. At the end of this year we will have half (63) of that complete.”

Under the agreement, members of all four unions may perform all assigned work without regard to craft or union affiliation. Each covered employee receives a $500 signing bonus, a $1 hourly efficiency differential and guaranteed employment for the duration of the four-year agreement.

In addition, the current ratio of members of each union working at Huntington was preserved.

The rebuild effort at Huntington is one of several ways CSX is upgrading and increasing its locomotive power. In the past, Frederick Eliasson, CSX’s chief financial officer, has said upgrading the railroad’s locomotive power is a key part of meeting its goals in service excellence.

CSX is buying 200 locomotives this year and next from GE at an undisclosed price.

Also, it recently traded 12 SD80MAC units with Norfolk Southern for 12 SD40 units, the kind that has been built at Huntington. All 24 locomotives were obtained by the two railroads when they acquired and divided the assets of Conrail.

So far, CSX has been pleased with the performance of its rebuilt units.

Brian Gessel, senior supply chain manager at the Huntington Locomotive Shop, said there have been no issues with engines rebuilt at Huntington, and the locomotives rebuilt there have the best line of road failure rate in the industry as measured by problems encountered between scheduled maintenance work.

CSX also is having 50 SD40-3 units built by outside contractors that are in effect in competition with the Huntington shop, Hare said. He added that he thinks his shop does a better job.